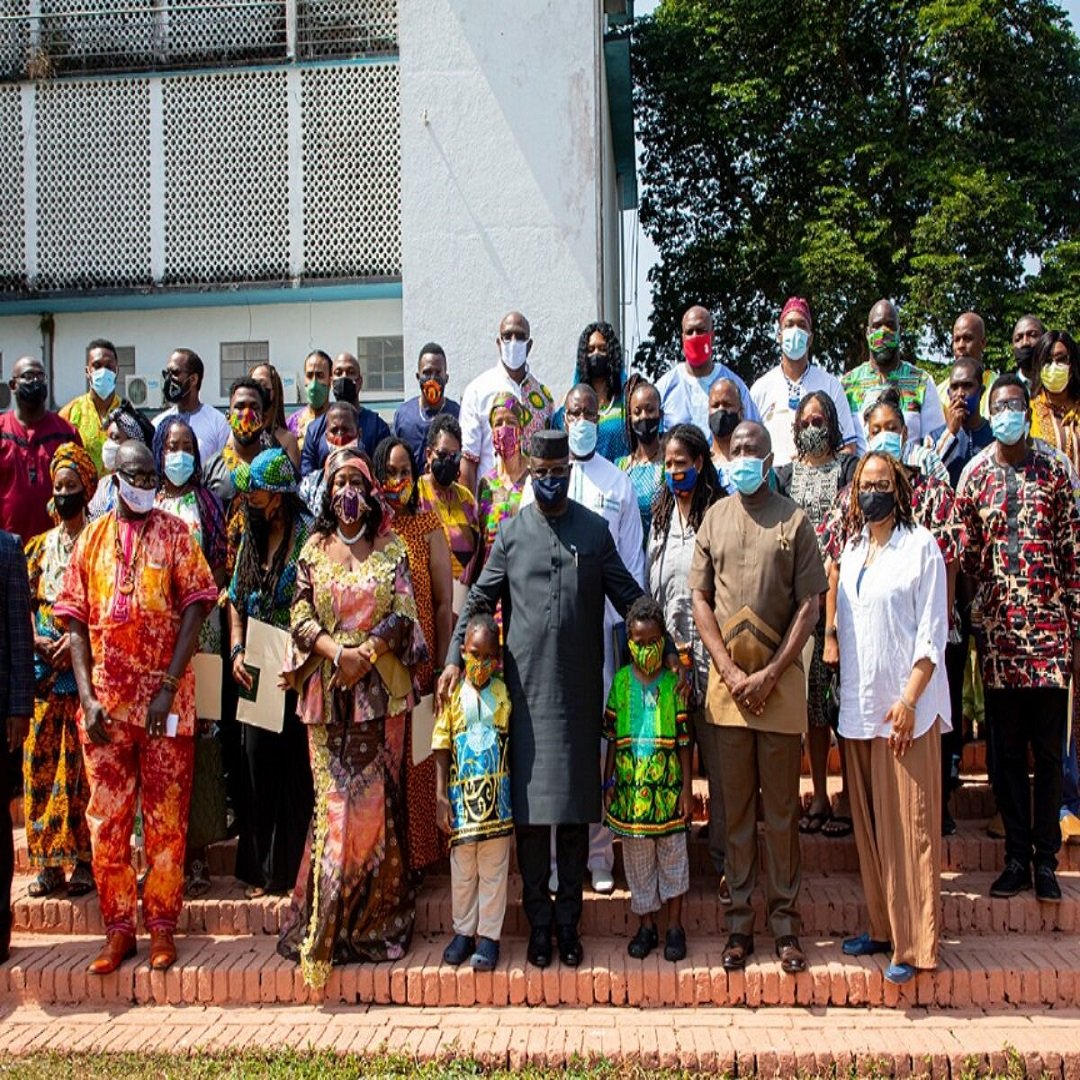 President Dr Julius Maada Bio has today granted Sierra Leonean citizenship to 22 African Americans who traced their origin to Sierra Leone through DNA results, most of them with roots to Bo and Tonkolili districts. This event was coordinated by the Ministry of Tourism and Cultural Affairs in collaboration with the private sector. Tourism Is Life Tours (Alieya Kargbo) as inbound and Manstravel, LLC (Eugenia Chinsman) as the outbound tour operators.

Handing over Sierra Leone’s passports to the newly pronounced citizens of Sierra Leone, the President welcomed them home, noting that their coming was not just for sightseeing or experiencing another culture for culture’s sake, but that they are also about to fulfil their curiosity and satisfy some long-held dream of making a spiritual pilgrimage to Sierra Leone.

He said that Sierra Leone as a country has come a very long way from slavery and colonialism, through repressive dictatorships, bad governance, corruption, epidemics and natural disasters and civil wars, adding that his government has worked hard to restore the dignity of the country.

”So, while others may invent history for the purpose of marketing tourism, you have lived your own history through over 400 years. This is the land of our mutual ancestors who were to later work rice fields and plantations that sustained the economies of the 13 British Colonies in the Americas.

“This is the land of Sengbeh Pieh of the Amistad revolt. This is the land of the rice coast, of the Gullahs, of folktales about the trickster, of handicraft, of foodways, of seeking rituals, and the call and response of African-American song and dance. This is Sierra Leone,” he noted.

“The Centres for Disease Control and Prevention rates us as Tier 1 low risk. We have under 3% case fatality ratio and only 76 recorded deaths. We are rated with a significantly lower violent crime rate. We have a free press, a free society, decongesting prisons, and working hard to build resilience in every facet of our nation,” he said.

President Bio further disclosed that his government is creating an enabling environment for the private sector to flourish, protect investments and support the establishment of businesses and organisations that would touch lives either through direct employment or social capital impact.

One of the beneficiaries of the citizenship, Dynast Abete Adewale Amir, expressed gratitude to President Bio for officially receiving them as citizens of Sierra Leone. He described today’s event as an emotional moment for them, adding that they are already pleased with the love they enjoyed from the President and citizens of the country.